Made it to Seattle for the time of my life! BurlyCon 2012! 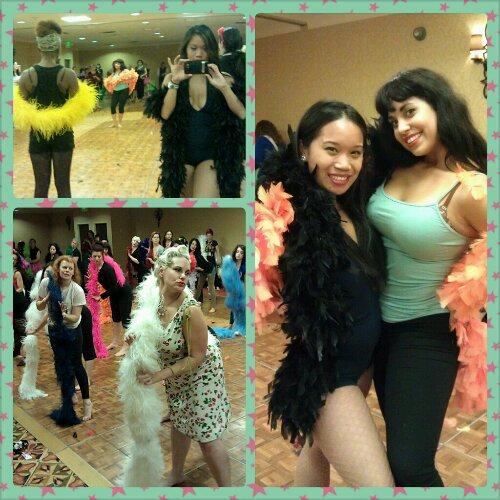 You can’t help but bear an ear to ear smile, endearingly tilting your head, with your eyes fixated on Coco Lectric. There’s just that something about this woman who keeps you entranced!

Taking her workshops was the initial treat I looked forward to, attending this convention. But little did I know that being at this this 4 day event, would I be wining & dining among burlesque royalty!

She, among several of the workshop presenters, was so amiable welcoming us in sincere conversation during our down time. I have to admit, I was a bit starstruck and she was just so friendly in conversation as if we were homegirls…okay, at least ones that knew each other for about a week. Ha!

The Big Bad Boa workshop was a great introduction as I take on the challenge of performing classical burlesque. I had no idea you can do such clever tricks with the fabulous feathery accessory!

Days later I took another workshop of hers, The Cheeky Reveal, which focused on her other signature antics as a renowned performer. We focused on the important tips in taunting the audience with a slow striptease. After following along, dancing with her to the song ‘Harlem Nocturne’ on repeat… I found myself sitting on the floor at the side of the small room, to simply revel in her presence watching her move.